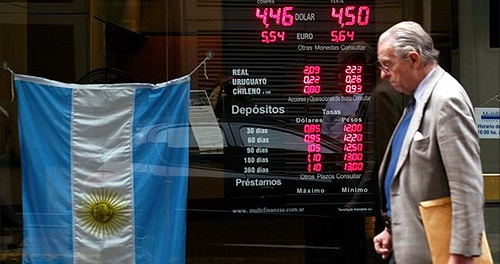 Argentina’s MERVAL Index was the best performing Frontier Market in May after surging just shy of 15% in the space of a month. The boost in the market was primarily down to MSCI upgrading Argentina to an Emerging Market in its semi-annual index review earlier in the month.

Transportadora Gas Norte, up almost 31%, was the best performing company on the bourse, while some of the eight companies that were added to the MSCI Emerging Markets Index – such as Transportadora De Gas (28.9%), Banco Macro (24.4%) and Pampa Energia (21.7%) – also contributed to the strong performance.

Jamaica continued its strong performance so far this year after its stock market posted a gain of 7.71% in May.

North Macedonia, the second best performing Frontier Market in 2018, continued its good run after seeing its main index rise by 7.44%.

Despite a 76% fall in Q1 net profits, fuel company Makpetrol was the best performer as its share price jumped by over 10%. A similar story was told with construction company Granit (7.75% increase in share price), who reported a 23% fall in profits in Q1 despite a 35% increase in operating revenue. The other strong performer was Alkaloid AD, who experienced an increase of just under 9% in May.

The Beirut Stock Exchange fell by 5.6% in May as an ongoing strike at the Central Bank of Lebanon forced the closure of the stock exchange for a number of days.

The strike was initiated after an attempt to save state funds to tackle the country’s increasing public debt via slashing salaries and service benefits prompted works to refuse to work. Interbank transfers, cheque clearances and foreign exchange transfers could not function or settle as a result of the strike.

Slovakia’s Bratislava Stock Exchange was the second worst performing Frontier Market last month after it fell by just under 4.3%.

The Slovnaft (-9.3%) refinery was the worst performer as it dealt with the suspension of contaminated Russian oil through the Druzhba pipeline. The problem occurred when a Russian oil producer attempted to increase oil production by adding a large amount of organic chlorides, which can cause problems for refinery facilities and needs to be removed before being shipped to customers. The other major decliners on the bourse were Biotika Slovenska (-6/73%) and Vseobecna Uverova Banka (-6.34%).

Investors fleeing from stocks to bonds contributed to a 4.3% fall in the Nairobi Securities Exchange in May as the worst performing Frontier Market in 2018 continues its bad run this year.

Insurance company Britam Holdings shed just over 65% of its share price over the course of the month despite attempts to cut costs to boost its struggling bid to gain profits. WPP Scangroup also endured a fall of 37.4% over the same time period, while CEO of Kenya Airways (which fell by 28.6%) Sebastian Mikosz announced that he will be stepping down at the end of 2019

Copyright © 2022 Create a free website or blog at WordPress.com.