In its annual Frontier 50 Index Review, FTSE have announced several key changes regarding the composition of the index, including the re-installation of Argentinian equities.

After being demoted to “unclassified” market status by FTSE’s 2014 Frontier Market review, Argentina will now have three stocks in the index: energy company Yacimientos Petroliferos Fiscales (YPF), Banco Macro and Pampa Energia. There was also further good news for the South American nation in the review as five other companies have been placed on the “reserve list” and are likely to be included in the upcoming quarterly review (these companies are Grupo Financiero Galicia, Banco Frances, Siderar, Telecom Argentina and Petrobras Argentina).

Vietnam was also a beneficiary of good news as three of its companies – Saigon Beer Alcohol Beverage, FLC Faros Construction and No Va Land Investment Group – were selected to be added to the index. FLC and Saigon were also notable additions to the MSCI Frontier Market Index in February this year and both companies enjoyed significant increases in their earning in 2016.

Kazakhstan, the best performing Frontier Market so far this year, is now finally represented in the index after FTSE announced the intention to include two companies from the country. Morocco’s mining giant Managem completed the list of newcomers and increased the North African nation’s allocation in the index.

While the likes of Argentina and Kazakhstan received uplifting news, the contrary can be said for Nigeria as FTSE announced the removal of four securities from the FTSE Frontier 50 Index (Ecobank Transnational, Lafarge Africa, Guinness Nigeria and Forte Oil) despite the recent upturn in the Nigeria Stock Exchange since the start of the year. The expulsion of Nigerian equities from the index could prompt fears of the African nation’s Frontier Market status being stripped away by FTSE, a concern that is also prevalent with in the MSCI Frontier Market Index.

Oman was another unfortunate casualty as FTSE dropped two of its companies from the index. Ominvest and National Bank of Oman, both residing in the finance sector, were ejected, effectively halving the number of Oman-based stocks in the index. The Muscat Stock Exchange’s performance currently puts Oman in the precarious position of being one of the worst performing Frontier Markets this year after shedding almost 12% of its value since the 1st of January.

Completing the list of exclusions are Vietnam’s Saigon Thuong Tin Commercial, Bangladesh’s Lafarge Surma Cement and Jordan’s Al-Eqbal Co. for Investment, the removal of the latter signalling the end of Jordan’s presence within the FTSE Frontier 50 Index. 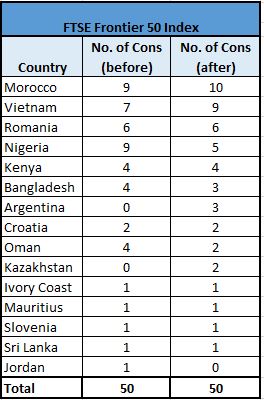 FTSE Frontier 50 Index: before & after

The simultaneous inclusion of a new company and removal of four Nigerian equities has made Morocco the country with the most constituents in the FTSE Frontier 50 Index, which Moroccan equities representing 20% of the total count. Vietnam and Romania will enjoy healthy allocations (9 and 6 respectively), Argentina is back in the index and Kazakhstan is the fresh-faced newcomer.

At the other end of the spectrum, the Ivory Coast, Mauritius, Slovenia and Sri Lanka all boast a solitary constituent each. Jordan is the only country to be completely removed from the index.

The FTSE Frontier 50 Index recorded a 21.2% increase between the start of the year and the end of August, lower than the FTSE Emerging Large Cap Index (25.6%) but higher than the FTSE Developed Index (14.4%)