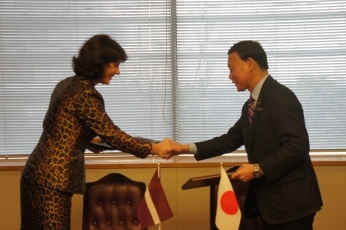 The governments of Latvia and Japan have both agreed to sign a tax treaty with the aim of eliminating double taxation and prevent tax evasion and avoidance.

Latvian Finance Minister Dana Reizniece-Ozola and Japan’s Parliamentary Vice-Minister for Foreign Affairs of Japan Motome Takisawa signed the Convention (formally known as “The Convention between Japan and the Republic of Latvia for the Elimination of Double Taxation with Respect to Taxes on Income and the Prevention of Tax Evasion and Avoidance”). The agreement was signed during Reizniece-Ozola’s trip to the Asian nation to promote and discuss business and investments.

The main aims of the tax treaty are to:

Once ratified, this agreement is expected to further promote mutual investments and economic exchanges between the two countries.

Japan have been signing tax treaties with other countries too. A tax treaty signed with Chile last year has entered into force at the beginning of the year. This treaty also aims to lower withholding taxes on dividend, interest and royalties; as well as significant anti-abuse provisions. Latvia have also signed tax treaties, including ones with Switzerland and Cyprus, which also aim to reduce evasion and avoidance, as well as withholding tax rates.